Marta Donahoe, an educator whose involvement in the Montessori community spans 4 decades. 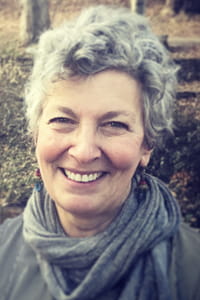 Every year, the American Montessori Society bestows a Living Legacy Award on an individual whose dedication and leadership has made a lasting impact on the AMS community. Our 2019 honoree is Marta Donahoe.

Starting with an internship in a Montessori classroom, in 1979, Marta Donahoe’s career in education has covered a range of ages, 6–18, and environments—public and private schools, as well as teacher education programs. She earned her master’s in education from Xavier University, where she studied with Martha McDermott and Hilda Rothschild. She was trained at the Early Childhood level and holds AMS credentials at the Elementary I–II and Secondary I– II levels.

Marta’s breadth of influence is perhaps best exemplified by her impact on the educational landscape of Cincinnati—where, in 1993, she began taking steps toward opening a public Montessori Middle School program. As part of the planning team, she visited other programs for children of that age range, both in the U.S. and abroad, and consulted with experts on Montessori Secondary education. By 1995, Cincinnati Public Schools was ready to open the doors on what would become Clark Montessori Junior High School and, a few years later, Clark Montessori High School, the first public Montessori high school in the country. For 18 years, Marta coordinated the development and implementation of Montessori programs there.

After being invited, in 2003, by the government of Seoul, South Korea, to present teacher education workshops on Montessori Secondary principles, Marta assembled a team to design a Secondary Montessori teacher education program back in Cincinnati, based on what the Clark pioneers had learned. In 2005, the Cincinnati Montessori Secondary Teacher Education Program (CMStep) began training its first cohort of teachers, with Marta serving as the program’s first executive director—a position she maintained until 2017; she is currently CMStep’s director of professional development.

Marta has worked with the Ohio Montessori Alliance and recently served on the board of the Avanti Montessori Charter Management Organization. She studied organizational development and Flawless Consulting with Peter Block and consults with Montessori schools all over the country, working mostly with adults in Montessori middle and high schools. She is a certified instructor with Mindful Schools and has incorporated mindfulness into the fabrics of Clark Montessori and CMStep. Marta trained teachers in Puerto Rico and worked closely with them to establish their own Secondary training program. And, a frequent presenter at Montessori conferences, Marta also serves on the editorial advisory board of Montessori Life and has published several articles in both Montessori Life and The NAMTA Journal.

Marta lives the belief that all of us benefit from interacting in positive, productive ways and that a high-quality, rich education is the right of all people. She believes and lives the notion that “Everybody does better when everybody does better.” Marta and her husband have 3 grown children and 6 grandchildren. They enjoy hiking and biking near the waterfalls and in the woods around Asheville, NC, where they live.